What are Zip Ties? 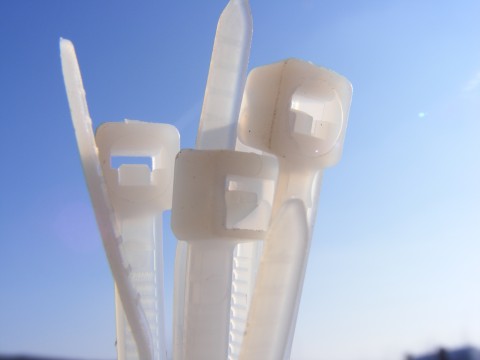 Also known as zips, cable ties, tie-wraps, hose ties, and zap-straps, zip ties are low-cost, effective tools for holding items together. They are used worldwide, in countless ways from bundling household wires, to use in construction and law enforcement. Zip ties are primarily made of plastic. One side of its thin length has teeth, that interact with a pawl one one end which acts as a ratchet.

History was made when zip ties were invented in 1958 by an electrical company named Thomas & Betts. Ty-Rap was the original name of the device. Initially, zip ties were designed to harness airplane wires. The original design used a metal tooth inside the pawl. To make the devices more cost effective, manufacturers later changed to the nylon/plastic design.

The idea for zip ties came to Maurus C. Logan, an employee of Thomas & Betts, while touring a Boeing manufacturing facility in 1956. Wiring an aircraft was an arduous task, with thousands of feet of wire tied to sheets of plywood with nylon cord. Seeing how often the operators were injuring themselves in the process, Logan began the task of inventing a less injurious process.

Are There Different Kinds of Zip Ties?

Yes! Throughout its history, the zip tie has changed numerous times. Here are a few variations.